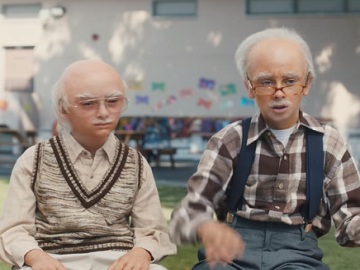 They get Star Wars on their Go-GURT tubes.” – one of them says looking at a girl opening her Start-Wars-themed Go-GURT tube. “Even their soccer balls are fancy.” – the other one says, trying to kick a soccer ball that arrives at his feet.

Concluding with the tagline “Kids Never Had It So Easy”, the ad is also a reminder for people that Star Wars: The Last Jedi will hit theaters December 15 and that tickets are already available.

The two boys also promote, in other commercials, the new EZ Open Go-GURT tubes, highlighting that 3rd graders today don’t know what it’s like to struggle opening Go-GURT or sweat in gym class or walk (since they have hoverboards).