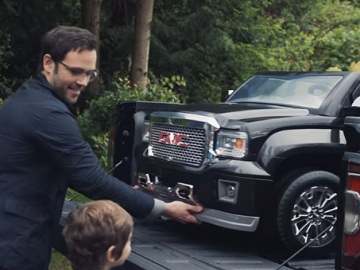 GMC has released a new commercial, part of the brand’s new ad campaign, titled “Like A Pro”, set to showcase the GMC’s 2017 lineup of trucks and SUVs.

The 60-second spot, dubbed “Dad Like A Pro”, features a father and his young son going through their daily routine, which includes getting dressed in similar outfits, having the same thing for breakfast – cereals, orange juice, sprinkle water – in identical bowls, glasses and cups (the difference being made by the initial engraved on the cups), reading the newspaper (well, the kid doesn’t know how to read, but he still insists on looking into the newspaper), and making sketches. Their quality time together ends when the man must go to work. The boy, remaining at home, is waving at him, as he gets in his Sierra pickup truck (1500 Denali) and leaves. In the evening, he gets, though, the best surprise gift he wished for: a mini GMC Sierra pickup truck.

The spot, featuring a real-life father and son, is set to debut on Father’s Day, in select media, including the final round of a major golf tournament. The song playing in the background is “Me And You” by Barry Louis Polisar, from his 2008 album “Juno”.