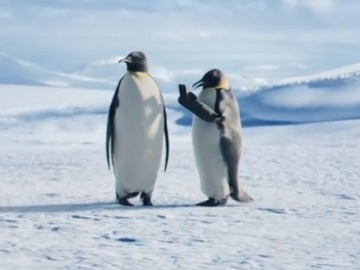 GEICO has dropped a new commercial, highlighting that, “as long as GPS can still get you lost, you can count on GEICO saving folks money”.

Titled “The Great Penguin Migration”, the 30-second spot features two emperor penguins walking into the opposite direction with respect to their fellow penguins, who are trekking a hundred miles inland to their breeding grounds, during the Great migration.

“This time next year, we’re gonna be sitting on an egg.” – one of the two penguins says to the other. Just when they think they’re getting close, the GPS voice tells them to make a U-turn and informs them they will arrive in 92 days. One of them realizes the GPS got them lost and tells his fellow they’re never going to breed, but the latter, who seems more patient and optimistic, asks him to give it a second. “No, no, nope, nope.” – the first penguin answers, determined to follow his instinct rather than the GPS instructions.

The spot ends with Steve Tom saying “as long as GPS can still get you lost, you can count on GEICO saving folks money.” and adding the company’s tagline, “Fifteen minutes could save you 15% or more on car insurance”.