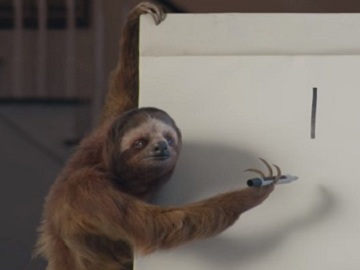 GEICO has released a new commercial, featuring a sloth that challenges some friends at a neighborhood game night.

The 30-second spot features the sloth drawing something on a flip chart and a group of friends trying to guess what it is. “A small finger”, “a worm”, “a tiny sword”, “bread stick”, “a walking stick” – are only a few of the guesses taken by one of the two teams seeing the vertical line drawn by the sloth. When the time is up, they find out it was a tandem bicycle.

“As long as sloths are slow, you could get on GEICO saving folks money. Fifteen minutes could save you fifteen percent or more on car insurance.” – actor Steve Tom says as the company’s spokesman.

The commercial cast includes Steven Prichard and Elleen Fogarty as the couple taking guesses, Travis Cole and
Samantha Sloyan as the other couple forming the opposite team, and Johnny Sneed as the scorekeeper man.