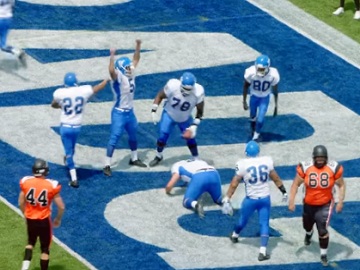 GEICO continues its “Excessive Touchdown Celebrations” ad campaign with a new ad, featuring a team celebrating a fumble recovery in the end zone with a jam session.

“And the fumble was recovered for a touchdown. What? Yes, it appears they are playing rock and roll.” – the sportscaster is heard saying in the 15-second spot, while on screen the soccer players, dubbed “The Rock Band”, are seen showing off their dance moves, with two of them playing the guitar in the air, another one sitting on a teammate and playing virtual drums, and another one, a chubby one who’s holding the ball, pretending he’s the frontman. Finally, the referee is also seen going to them and interrupting their unexpected celebration.

“Switch to GEICO and you’ll feel like celebrating too.” – the voiceover says at the end of the commercial.