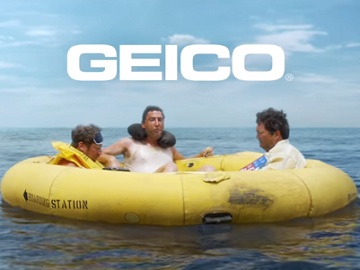 GEICO has launched a new commercial, highlighting that you can save 15% or more on car insurance if you switch to GEICO.

The 30-second spot, dubbed “Adrift and Hungry”, features three men who have survived a plane crash and, while awaiting rescue on their life raft, fight over the last morsels of food.

“Walter, is that the rest of our food?” – asks one of them, seeing Walter mouthing something.
“What? No!” – comes the answer from Walter, who is obviously hiding something.
“How come you have cheese in your beard?” – asks the third castaway.
A little bit frightened, Walter replies “Because switching to GEICO could save you 15% or more on car insurance”, which makes his fellows drop the food subject and simply say “Oh, ok!”.

The spot ends with the voiceover saying “Because saving 15% or more on car insurance is always a great answer.” and with the three men catching a small fish that fell into their raft and then accidentally dropping it into the ocean.

While Walter is played by Pete Carboni (known for Sad Imitation, Sad Imitation: His 387’th Class, and Food Court), the supporting castaways are portrayed by Scott Urner and Aaron Ikeda.