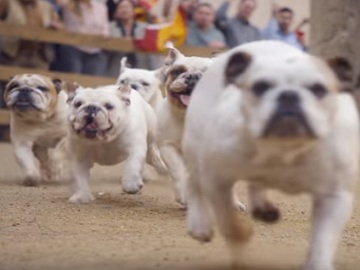 GEICO has released a new ad to highlight that you could save 15% or more on your car insurance.

The 30-second spot features a runner (played by Eli Bildner) tripping during the running of the bulls race organized in a Spanish town. Seeing him on the ground, the others look at him, but don’t stop from running and an old lady (played by Carol Herman) starts crying loudly in her handkerchief. Despite his desperate cries, the man is left alone to face the imminent danger from the raging.. bulldogs. Yes, a bunch of running bulldogs show up from behind the corner, making the man shriek in terror. The furry quadrupedals that are breathing heavily and snorting, keep running, though, with only one of them stopping to sniff the man.

“The running of the bulldogs? Surprising. What’s not surprising? How much money Aleia saved by switching to GEICO.” – says the voiceover in the ad, referring to a woman from North Las Vegas, NV, who claims she saved $307 with GEICO, adding that “fifteen minutes could save you 15% or more”.