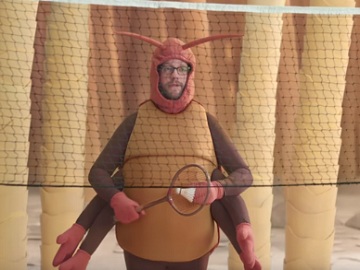 GEICO has released a new ad, highlighting that, not only it helps you save on car insurance, but it also have a 97% customer satisfaction rating.

The 30-second spot begins with a guy (David Gironda, Jr.) telling his date (Tate Hanyak) that GEICO just saved him hundreds of dollars on his car insurance, which makes the woman decide to take a closer look at GEICO. At this point, the filming angle focuses on the golden retriever panting behind them and the spot continues with a scene illustrating two fleas playing badminton in the dog’s coat. Well, actually the fleas are two men dressed in fleas costumes (Eric Normington and Adam Herchman), who discuss about GEICO.

“GEICO has a 97% customer satisfaction rating and fast and friendly claims service.” – says one of them.
“Speaking of service.” – answers the other one, willing to continue their game.

After the first flea serves, his opponent says it was out and from here starts a disagreement on where the shuttlecock was. Eventually, the one stating that the shuttlecock was out, takes it and throws it away, asking “What about now?”. The “flea’s” move resulted in the loss of their only shuttlecock.

The commercial ends with the voiceover urging viewers to take a closer look at GEICO, adding the company’s tagline, “Great savings and a whole lot more”.