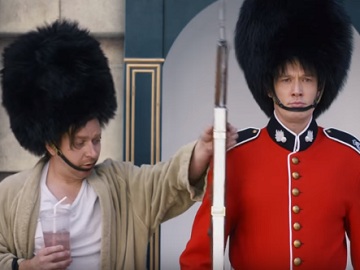 GEICO continues its “It’s not surprising” campaign with a new commercial done by Martin Agency, featuring a scenario you might be surprised by: casual Friday at Buckingham Palace.

The spot, available in 30- and 15-second versions, features a Queen’s Guard taking a casual Friday at the palace.
While his teammate (played by Christopher Ashman) wearing the famous full-dress uniform of red tunic and bearskin, is leaving, he is seen showing up at the Changing of the Guard dressed in a white T-shirt and swimming shorts, with a dingy robe on, and wearing flip-flops. After taking a seat in his lawn chair, he starts snacking on some buffallo wings and reading the newspaper, and wawing to the spectators, who are obviously very much surprised.

“Casual Fridays at Buckigham Palace? Surprising. What’s not surprising? How much money Nathan saved by switching to GEICO.” – the voiceover says while a guy presented as Nathan from Lexington, KY, is seen holding a tablet with the following text on its display: “Saved $519 with GEICO”.

“Fifteen minutes could save you fifteen percent or more.” – the voiceover adds, and on screen the Casual Friday Guard (played by Daniel Wolfe) is seen again taking a nap in his chair.