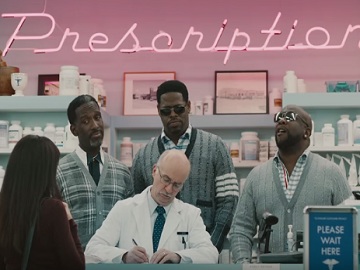 GEICO Insurance continues the “It’s what you do” ad campaign, highlighting that you could save 15% or more on car insurance by switching to GEICO, with a series of new commercials starring Boyz II Men.

The 30-second spot titled “Side Effects”, aiming to highlight that Boyz II Men can harmonize to make even medical
side effects sound good, features a woman in a drugstore being told by the pharmacist that her new prescription does have a few side effects. When she wants to know what kind of side effects, the members of the legendary band show up behind the pharmacist, singing “You’re gonna have dizziness, nausea, and sweaty eyelids. And in certain cases chronic flatulence”. Blushing a little bit, the woman says shyly “No”, but the musicians continue with new lyrics: “Soooo gassy girl.”, “So gassy” in different voices.

The insurance company has teamed up with the American R&B vocal group for them to sing your “brutally honest” feelings.

You can share and let them speak your mind so you don’t have to.