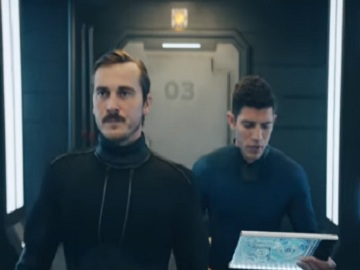 Steve Talley plays a forgetful space captain in the latest GEICO commercial, revealing that when he’s not busy saving the Galaxy, he likes to watch funny videos on the YouTube channel of the insurance company.

The ad features the 36-year-old actor, mostly known for his role as Dwight Stifler in the fifth and sixth installments in the American Pie film series, boldly striding through the ship and firing up his subordinates to “teach these freaks some manners”, referring to the aliens attacking their ship. When one of the soldiers wishes him good luck, he says thanks, mentioning he doesn’t need luck because he has skills. At this point, though, his enthusiasm and confidence vanish as he realizes he doesn’t have his keys. He tells this to his subordinate (played by Ali Ghandour), who uses the communication system to inform everyone that they are looking for the Captain’s keys again and reminding them that they are on a silver carabiner. Looking at a screen and seeing what happens outside, the Captain cannot help but exclaim “This is bad!”.

The commercial ends with GEICO’s spokesman Steve Tom saying “As long as people misplace their keys, you can count on GEICO saving folks money” and adding the tagline “Fifteen minutes could save you fifteen percent or more on car insurance”.