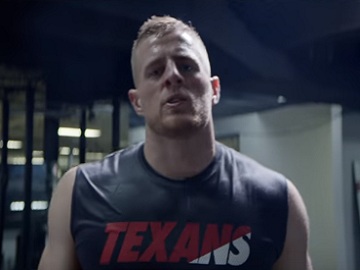 “So you love your game?” – asks the Houston Texans defensive lineman at the beginning of the 30-second spot, titled “Difference Maker” and aiming to highlight that, in the game of football, “every ounce counts”. Because your opponent might have the same gear and do the same things you do, but the next ounce of effort you give might be the one ounce your opponent doesn’t.

“So you love your game? So does he. You say ain’t nobody going to work harder? He said the same thing. You get an hour of training before the sun even comes up? There are early risers out there. You got the gear? They got the gear. You got a secret weapon? This dude doesn’t need one. See, this isn’t just a game. It’s inches. This is a game of ounces. And the next ounce you give might just be the one the other guy doesn’t.” – says Watt.

The spot ends with the voiceover urging you to “Rehydrate, replenish and refuel”.

This is not the first time Watt appears in a Gatorade ad. Last year, he starred in a series of spots called “Burn It To Earn It” in which he challenges people to work up a sweat.