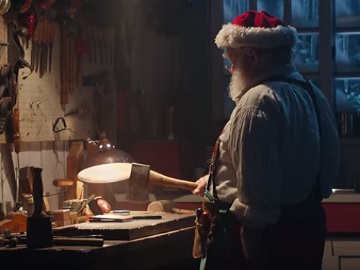 GameStop invites you to get up to 50% off the biggest games of the year during its Game Days Sale event, in a hilarious new commercial.

The 30-second spot features Santa in his work shed using a variety of tools, including a hatchet, a meat cleaver, a katana, and a handsaw, to chop dozens of video games in half. When he finally takes a chainsaw to “manage” a stack of games, an elf shows up and informs him that what people actually want is half off the price of games. “Sh*t!” – Santa says after hearing this.

The commercial ends with the voiceover urging you to get up to 50% off select whole games during the Game Days Sale and saying the company’s tagline, “Joy to the Players”. Among the games you can purchase are Space Zombies, The Evil Within II, Destiny 2, Sports Madden NFL 18, Star Wars Battlefront II, Call of Duty WWII, and more. The offer is valid starting December 17 through December 24, 2017. In addition, GameStop has other deals, as well, one of them giving customers the chance to get Playerunknown’s Battlegrounds plus $50 off a future in-store purchase when they buy Xbox One X.