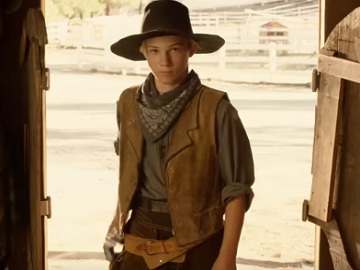 One of the spots features a Wild West story in which the actors are kids. “I reckon it happened a fortnight ago. Buster got the call: Game On. Delilah was smart enough to know Willie didn’t stand a chance. How could he? No matter how many games Willie bought, the kid always played more on GameFly. Cause they got all the new and classic games. With GameFly, kid plays more and spends less. It’s just one low monthly price. Delivered right to your ranch.” – a child voice over says. When “The Kid” arrives, the protagonists look into each other’s eyes and then are taking out their consoles and start playing games on GameFly.

“Join thousand of families using GameFly to play more great console games for less. With more than 9000 titles, free shipping and no late fees, GameFly keeps gaming families going on the newest console platforms. Start your 30-day free trial at gamefly.com.” – the voiceover says at the end of the spot.