Home / Fashion / Fruit of the Loom Commercial: Sweet in Sweats 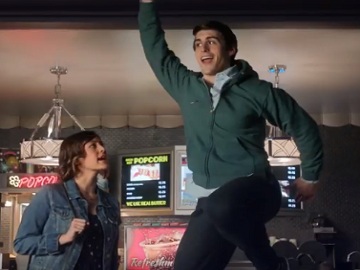 Fruit of the Loom has launched a new commercial, aiming to highlight that its activewear provides long lasting wicking and odor protection thanks to the Dual Defense technology.

The 30-second spot, titled “Sweet in Sweats”, features a young couple leaving a cinema hall after having seen a movie and discussing about it. “I’m not sure I’m feeling the way that movie ended.” – the girl says. Her partner, though, doesn’t seem too interested in approaching this topic as he’s more eager to show “the outward expression” of the inner confidence he feels when he’s wearing the sweat he’s wearing. “Oh, I’m feeling sweet in this sweats.” – he says in a singing voice and then jumps up in the air, where he remains with his hand raised toward the ceiling. She tries to make him get his feet on the ground again, but he maintains the awkward position for a few moments. “Take a look at how good you could look in Fruit of the Loom sweats. Now with Dual Defense.” – the voiceover says while the guy, Dan, is in the same position.

When she asks Dan what was that, he anwers: “That was just the outward expression of the inner confidence I feel when I’m wearing these sweats.”, adding “And here comes the logo”. At this point, the logo “Feelin’ sweet in sweats” appears on screen.