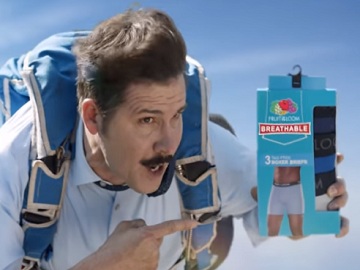 “Breathable micro-mesh fabric is great for underwear. Not so great for parachutes.” – this is the message conveyed in one of the latest Fruit of the Loom ads, promoting the men’s breathable underwear.

The 30-second spot, dubbed “Parachute”, features two guys jumping out of a plane and talking, on their way down, about the breathable boxer briefs from Fruit of the Loom. Holding a men’s breathable 3 pack assorted color boxer brief in a hand, one of the guys says that these briefs’ have tiny holes to allow air flow and keep you cool.

Curious to know if tiny holes really make that big of a difference, the other guy learns that he’s just about to find out as his fellow has put a bunch of tiny holes in his parachute. “Ha, air really gets through there.” – realizes the guy and thanks him for the contextual demonstration. “But how do I….?” – he begins a question, but doesn’t manage to end it – you can imagine the reason why. The next scene features the guy on a hospital bed, with his whole body in cast, and his mate continuing the question: “…buy them online?” and simply saying “You just click here”, referring to the brand’s website.

Fruit of the Loom Breathable boxer briefs, made from cotton mesh fabric that promotes air flow preventing you from getting hot, features moisture wicking technology which distributes sweat away from the skin, keeping you dry throughout the day. One men’s breathable 3 pack assorted color boxer brief costs $15.99.

Tags: Fruit of the Loom