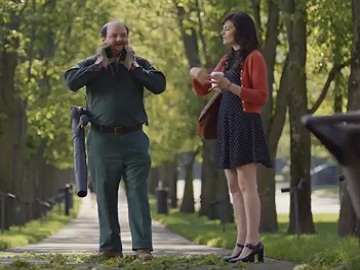 “Breathable underwear from Fruit is so incredible you’ll want to talk about it.” – this is the idea behind one of the spots, featuring a young woman who, after trying the brand’s breathable underwear, starts talking about it with everyone: with strangers in the elevator, with coworkers at the cafeteria, at the office, and even with a street sweeper, on the street, making him cover his ears.

While the protagonist is only showed talking, with viewers not being able to actually hear what she’s saying, the voiceover, through her speech, gives some hints and urges ladies to not talk about their breathable underwear from Fruit of the Loom.

“When you say your underwear allows really great airflow, you’ve already gone too far. By telling us your underwear has tiny air holes, making it more comfortable, you’ve made the rest of us less comfortable. You’re painting a picture we don’t care to see in a way we already regret. But it’s breathable, we get it.” – says the voiceover, ending the spot with the campaign tagline, “So incredible you’ll want to talk about it”.

Tags: Fruit of the Loom