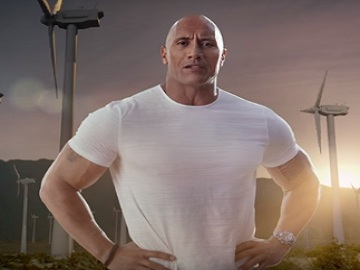 “Ford engineers work every day developing alternative ways to fuel their vehicles, helping to propel us into the future. And Ford Service techs work just as hard at making sure that your Ford, and mine, continue to run clean and strong. No one knows your Ford better than Ford and Ford Service.” – says The Rock in the 25-second spot titled “Ford Engineers: Propelling Us into the Future”. He also stars in another spot, raising the question “When it comes to servicing your vehicle, would you rather have a team of one or an army of thousands?”, as an introduction for the 35.000 hard-working specialists at Ford Service all across America.

He ends the commercial by saying the campaign tagline, “Because no one knows your Ford better than Ford and Ford Service”.

Johnson, who is an Ambassador of Service for Ford since 2015, when he signed a multi-year deal with the company, and has starred in other commercials promoting “The Specialists at Ford”. The semi-retired wrestler and actor owns a 2016 Ford F-150 pickup truck nicknamed “The Bull”, which has been customized by California Custom Sport Trucks.