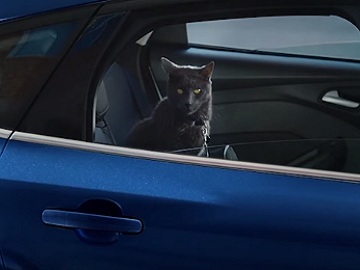 Created with the idea that “We all drive, some cats just know how to roll”, the spot features a grey cat in the backseat of a Ford Focus closing the window when a dog starts barking at her so that she wouldn’t hear him anymore.

As the car is ready to hit the road again, the cat looks away, showing “the dude” that she knows how to roll.

The song playing in the background is “Rumble”, an instrumental by American group Link Wray & His Ray Men, released in April 1958 as a single (one of very few instrumental singles banned from the radio airwaves in the US).