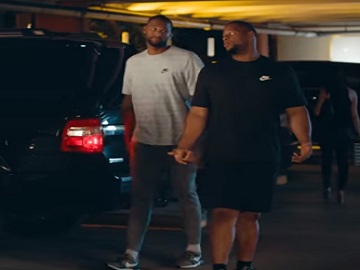 Footlocker got DeMarcus Cousins and Ndamukong Suh to talk about their reputation in the retailer’s new campaign, for the back-to-school season, done by worldwide agency BBDO.

The NBA center, also known as “Boogie”, and the NFL defensive tackle co-star in a 40-second spot titled “Make an Impression”, which is a humorous and ironic take on their reputation, not the best in their leagues. After putting two Footlocker shopping bags in the trunk, Cousins and Suh, who are in an underground parking lot, head towards the elevator, but on their way, being too focused on their perceived ill-will, don’t notice what happens around them.

“With guys like you and me, it’s like reputation precedes us. When people get a certain impression…” – Cousins says, while Suh literally walks over the groceries of a lady who’s trying to collect them and put them back in bags, and hits the walking stick of a guy with a leg in cast. He agrees with his mate and empathizes with him, concluding “Are we perfect? Maybe not. Who is?”. In the meantime, though, they fail to hold to elevator for an old lady who asks them to hold it.

The spot features a premium assortment of Nike gear, including the Air Max 97, that can be purchased at Foot Locker stores nationwide and at the retailer’s website.

Ndamukong has been labeled as a dirty player and DeMarcus has been near or at the top of the NBA’s leaderboard for technical fouls the past couple of seasons. Stacy Cunningham, vice president of brand marketing and services at Foot Locker North America, said of them that they “bring an unparalleled passion and competitive edge to the game in their respective leagues” and that “”While no one is perfect, their style and dedication to the game are second to none, making them a natural fit for Foot Locker”.