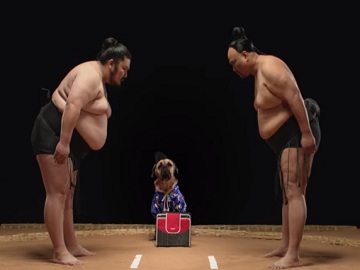 Cinco the dog stars in a series of new Five Star ads, continuing to try to defeat Five Star. After not being able to destroy his owner’s homework in the cafeteria, he found some special guests to help him out: two sumo wrestlers.

“When it comes to destroy Five Star, you can go big or you can go bigger.” – says Cinco at the beginning of the 30-second spot dubbed “Sumo”, dressed in a Gyōji uniform, referring to the sumo wrestlers he’s about to referee. The two try to destroy a Five Star expanding file, but they don’t succeed, so Cinco concludes they are a “couple of lightweights”.

“Built strong to last long” – adds the voiceover at the end of the commercial, which is the brand’s tagline.