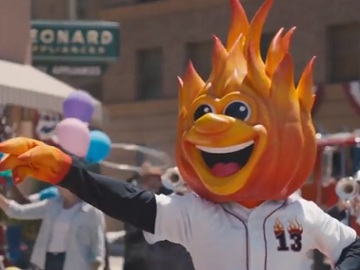 The new spot begins, as all the others, with Academy Award-winning actor J.K Simmons (a Farmers spokesperson) walking through the Hall of Claims together with a customer, telling him “At Farmers, we’ve seen almost everything, so we know how to cover almost anything. Even a Red Hot Mascot”.

The ad then continues with a rendition of an event occurred on September 20th, 2013, when a guy wearing a mascot with a red flame-shaped head was riding a small convertible through the streets. “Hey, you’re on fire!” – a first person from the crowd told him panicked. “You bet I am!” – he answers. When a second person – this time a man – tells him he’s on fire, he also ignores the seriousness in his voice and just says “Oh, yeah!”. “No, you’re on fire. Look behind you.” – a woman also tells him. At this point, he turns around and, seeing that the car was engulfed in flames, he jumps out of it. “I’m cool, I’m cool!” – he says while trying to get up. Back in the Hall of Claims, Simmons tells the customer “That’s one way to fire up the crowd. But we covered it.” and advises him to talk to Farmers. The “Hall of Claims” campaign, launched in 2016, has featured, so far, many other “real-life bizarre insurance claims”, from household accidents to unexpected run-ins with animals to car crashes, that the insurance company dealt with.