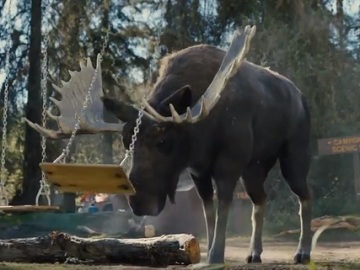 The 30-second spot, titled “Swing Set Standoff”, begins – like all the other spots included in the campaign – with a Farmers Insurance representative (played by J.K. Simmons) guiding a customer through the Hall of Claims (a fictitious museum filled with exhibits that illustrate bizarre and improbable, but real insurance claims, covered by Farmers agents), telling her that the company has seen almost everything and knows how to cover almost anything, even a “swing set standoff”.

The ad continues with a moose in a camp ground, getting close to a swing set placed by a family near their RV, and pushing a swing. After getting hit by it, the animal used all its force to tear the swing set down, which it did, breaking in the process also the window of the RV and scaring the people inside.

The spot ends with Simmons saying, in front of an exhibit highlighting the “swing set standoff”, that this claim was covered July 1st, 2015, and urging the customer to talk to Farmers, as they “know a thing or two because they’ve seen a thing or two”.

The insurance company advises people to get Farmers Comprehensive Coverage for protection from events other than collisions. This coverage is created for losses from other automotive mishaps like vandalism, riots, floods, hail, fire, theft, or even a goat taking out his aggressions on the side panel of your ride.