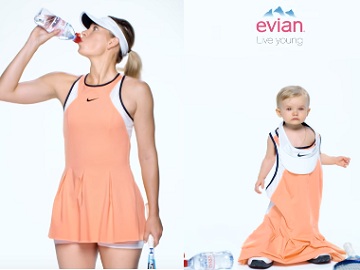 Evian has launched a new ad campaign, entitled “Oversize”, urging people to discover the world through the eyes of a baby.

This year, the water brand has brought in Russian tennis player Maria Sharapova, American tennis player Madison Keys and New Zealand golfer Lydia Ko, Swiss tennis player Stan Wawrinka, and French tennis player Lucas Pouille to illustrate this idea by appearing in spots in which they transform, after drinking a mouthful of Evian mineral water, into babies. The clothes don’t get smaller, so the babies are wearing the stars’ gear.

The campaign, created in collaboration with agency BETC, rolls out in the US, UK, Germany, France, Benelux, and Switzerland. The brand has produced, in working with Snapchat for the first time, a limited edition lens that will go live for 24 hours across six regions on the app, before launching worldwide via a Snapcode on Evian’s bottles.

Additionally, geofilters that change every week – also accessible via the Snapcode – have been introduced.

Previous: Cinnamon Toast Crunch Commercial
Next: Gatorade Commercial: One and Only