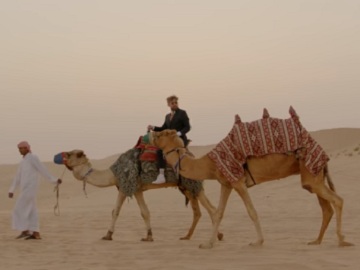 Ricky Wilson, the frontman of British indie rock band Kaiser Chiefs, has accepted the Abu Dhabi 48 Hour
Stopover Challenge raised by Etihad Airways, that made and released a short film featuring the artist “in action”.

The former coach of The Voice UK spent 48 hours exploring the best Abu Dhabi has to offer and doing all these
24 activities: tour in a slingshot, race in a supercar, cycle around the Formula 1 track, speed down a waterslide
at Yas Waterworld, board a super-yacht, buy a suit, enjoy tea on the Observation Deck at Jumeirah at Etihad
Towers, ski the desert sands on a snowboard, taste Black Truffle Pizza, go camel trekking, go dune bashing-driving
on desert dunes, learn to belly dance, dine in the desert, sleep under the stars, tee off at Saadiyat Beach Golf
Club, ride the Formula Rossa at Ferrari World Abu Dhabi, aat a local delicacy, kayak through the mangroves, fly
a falcon, haggle in the souk, visit the Sheikh Zayed Grand Mosque, enjoy a gold leaf facial, party at Iris, Yas
Island, and stay at Yas Viceroy hotel.

Etihad, the second-largest airline of the UAE (after Emirates), urges you take the Abu Dhabi 48 hour Stopover
#EtihadChallenge and post your experiences on Instagram so that you could win one of 500 great prizes throughout
2017.