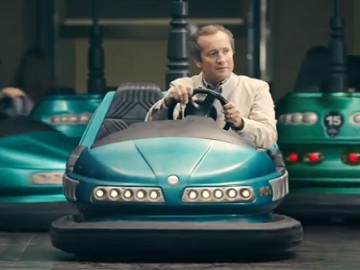 Esurance highlights, in its latest commercial, that “Safe Drivers Save Money”.

“Safe drivers who switch to Esurance could save money on car insurance.” – the voiceover says at the beginning of the 30-second spot, which features a middle-aged man being a safe driver of a kart. “You know, the kind of driver who always buckles up, comes to a complete stop, and looks both ways no matter what. Because Esurance believe that’s the kind of driver who deserves to save money on car insurance.” – the voiceover adds, while the man is seen doing all these safe moves before keeping driving.