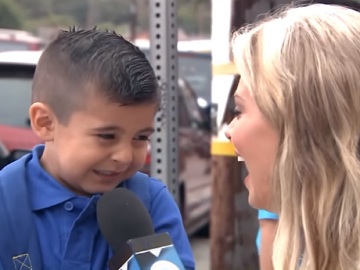 eBay has launched a series of new ads highlighting that on eBay you can find Prime Deals, such as a Google Home and Chromecast for the guaranteed best deal of $99.99, fashion items that are so you from this season, next season, or last season, and many more.

One of the spots features Courtney Friel, the Los Angeles reporter from KTLA that made a pre-kindergarden boy cry on his first day of school after asking him if he was going to miss his mom. Even though the kid initially says “No”, a second later he bursts into tears, thinking about his mom. This time, though, she asks the little boy, named Andrew, if he checked eBay and she receives the same answer: “No”.

“Get deals on what’s totally new and totally you. Fill your cart with color.” – the voiceover urges viewers at the end of the commercial.