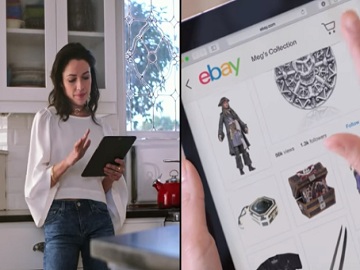 eBay’s latest commercial promotes the upcoming film from the Pirates of the Caribbean franchise, Dead Men Tell No Tales, and the film related merchandise for sale on the website.

“What does it take to find what you’re searching for?” – asks the voiceover at the beginning of the 30-second spot, featuring scenes from the movie. “I hear you’ve looking for Jack Sparrow” – says Barbossa (Geoffrey Rush ), the one-legged pirate captain of the Queen’s Anne’s Revenge, to someone who seems to be hanging somehow in the air. “I will die before I give up this search” – says astronomer Carina Smith (Kaia Scodelario), who’s on a journey to look for the trident of Poseidon, using, in the process, a diary with clues. The voiceover then continues his speech by mentioning that “it helps to know where to look”.

Obviously, Jack Sparrow couldn’t be missed. He’s featured asking to Carina and a man “Have either of you seen my bank? and adding “Found it” when a bank on wheels, drawn by several horses, that leaves a trace of money behind, damages a wall of the building he’s in.

The spot ends with the voiceover urging you to find, with eBay, exactly what you are after”, referring to Pirates of the Caribbean merchandise, including clothing & accessories, toys, collectibles, and other pirate loots, and inviting you to see the movie, in theaters May 26.