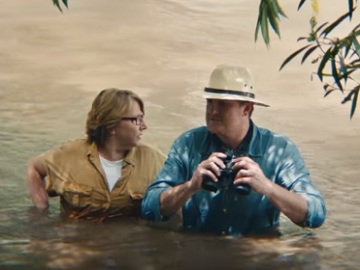 Amazon Video has released a new commercial promoting the upcoming NFL game, between Philadelphia Eagles vs. Carolina Panthers,and inviting you to stream it live, on October 12, at 8:25 PM, on Amazon Video.

The 30-second spot features two research scientists in the Amazon watching animals nearby. “Eagles lie before our eyes right here, in the Amazon.” – the man says. When the woman shows him panthers, as well, he cannot help but express his amazement.

“Wow, the Panthers and the Eagles are about to go head-to-head right here, in the Amazon.” “What is this, some kind of stream?” – the woman asks, when the ad reveals they are standing in a stream. “This entire stream seems to be streaming.” – he says and his colleague, taking out a tape recorder, adds “Thursday, October 12, the Eagles and the Panthers are facing off in the Amazon. On some kind of stream”.

The commercial ends with the voiceover urging viewers to “Stream Thursday Night Football live on Amazon”.