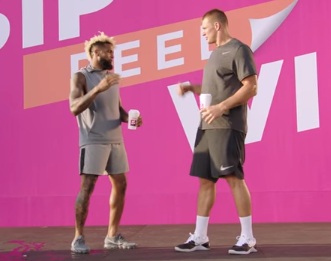 The 40-second spot features the two atheletes showing off their dance moves on a stage and having fun while trying to announce, using a bullhorn, the Sip Peel Win. Eventually, after all that dancing, they have a sit and enjoy their favorite Dunkin’ Donuts coffee.

During the Sip, Peel, Win, you could win either a $25, $50 or even $100 gift card to Dunkin Donuts. You are invited to visit your local Dunkin Donuts location and grab a large or extra large freshly ground, freshly brewed hot coffee and peel the sticker for your chance to win.

Both Rob Gronkowski and Odell Beckham have appeared in Dunkin’ Donuts ads also in the past, together with other stars, including Boston Red Sox slugger David Ortiz (aka Big Papi) and New York Giants quarterback Eli Manning.