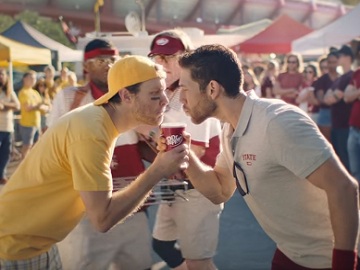 Dr Pepper has released a new ad, adjusting its usual tagline “The One You Crave” to “The One Fans Crave”, to celebrate its status as partner of the National Championship Trophy and College Football Playoff.

The 30-second spot, dubbed “Crave-Off”, features two rival fans fighting over one last ice-cold Dr Pepper at a tailgate, in front of a rookie vendor, who is – luckily – helped by Larry Culpepper. The latter shows up and proves the straw is mightier than the sword. “I’ve got just the thing.” – he says while placing the second straw into the cup so that the two guys could share the drink, which they do.

The commercial ends with the tagline “The One Fans Crave”.

The brand informs that, this college football season, Larry Culpepper is everywhere the Dr Pepper craving is, and,
highlighting that “One man can’t spread the word of college football and Dr Pepper alone”, invites you to help by purchasing a Larry Culpepper costume ($28), which includes the Larry T-shirt, flip shades, visor with wig, fanny pack, headphones, knee brace, sweatband, and ID badge.