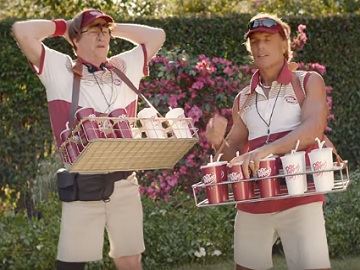 The 30-second spot features Larry (played by actor James Michael Connor) and his team of vendors being challenged for all their ice-cold Dr Pepper by some guys at a barbecue party. Luckily, Larry has two aces up his sleeve – Doug Flutie (former quarterback in the NFL, CFL, and USFL) and Steve Smith (former wide receiver who who played 16 seasons in the NFL, primarily with the Carolina Panthers), which helps him win the backyard football game. During the game, an original song is playing, whose lyrics highlight that “if you’re craving Dr Pepper, you got to make that catch.” When it’s Larry’s last chance, Flutie takes in and helps him win the game.

This campaign for the College Football season includes, besides a strong social media presence, Larry posters, bobble heads and costumes, complete with flip up sun glasses, that are available for purchase at the brand’s website.

Dr Pepper’s began sponsoring the inaugural SEC championship game in 1992, marking thus its official connection to college football. Over the course of time, other sponsorship deals, with each of the four additional major college football conferences, followed.