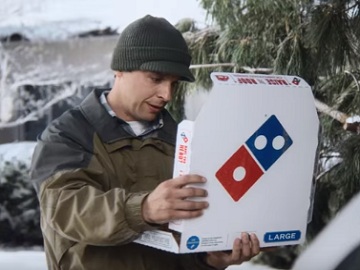 One of them, suggestively titled “Timber”, presents an unlucky customer arriving at home on a winter day and having his car hit by a tree. Worried that his Domino’s pizza might been smashed, the guy opens the door of his damaged car and pulls out the pizza box, which, luckly, reveals to be untouched. Relieved, he takes his pizza and starts walking down an alley covered by frost and then the inevitable happens, the guy slips and falls and his pizza flies into the air and falls down in the snow.

The end of the commercial finds the customer back at the store, having his pizza remade by Domino’s.

“When you carry out, some things are out of your control. But with Domino’s new Carryout Insurance we’ll replace your pizza if it gets ruined after you leave the store. Carry out large three topping pizzas for $7.99, every day” – the voiceover says.

Previous: Papa John’s Pizza Commercial: Any $10
Next: RetailMeNot Commercial: Hole in the Bucket