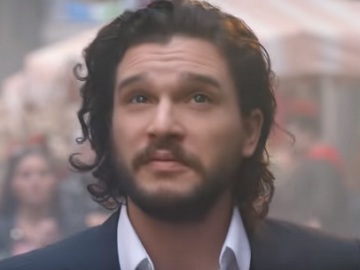 Kit Harington stars in the latest Dolce & Gabbana campaign for The One for Men, captured by Italian filmmaker Matteo Garrone with a hand-held camera.

The Game of Thrones star, who is considered “the perfect ambassador” for this perfume thanks to his “charismatic personality”, reflects – according to the Italian luxury fashion house – “the playful charm, the self-confidence and the inborn appeal of the Dolce&Gabbana man”.

The campaign features him in an open-air market on the streets of Naples, in Italy, enjoying a few moments in the company of local people. He greets them, gives a kiss to an old lady, dances with another one, interacts with food vendors and watches a seller at the market putting an octopus into a plastic bag, lifts a young boy from the crowd in his arms, and shakes hands with an old man.

The joyful soundtrack is “Tu vuò fa’ l’americano” (“You want to be an American”), a 1965 Italian hit written in Neapolitan that celebrates the genuineness and the charm of the Italian culture.

Described as “the natural, masculine version of Dolce&Gabbana The One”, The One for Men is “an elegant, sensual” Oriental Spicy perfume, featuring notes of Grapefruit, Coriander, Basil, Cardamom, Ginger, Tobacco, Amber, and Cedarwood, that is “decidedly modern but also a unique, timeless classic.” Available as an Eau de Parfum, The One for Men comes in an elegant flacon of dark hues finished with a glossy black metal cap.