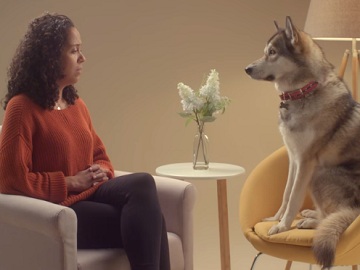 Dogs Trust reveals a series of shocking real reasons people decided to hand in their dogs to Dogs Trust in a new ad, highlighting that “A dog is for Life, not just for Christmas”.

Titled “Why I left you”, the spot begins with three persons – two women and a man – sitting in a chair and saying, during a face-to-face discussion, their break-up reasons. “Well, I think it became clear straight away what you weren’t just interested in me…”, “Towards the end, you got pretty big.”, “I just thought you’d want to sleep in my bed a bit more.” – they say looking toward the one they’re talking to and, as the spot goes on, it turns out it’s not their ex, but their dogs the ones they broke up with. And yes, these are some of their reasons. The list continues with reasons like “You’re just so… hairy.”, “And you wag your tail way too much. Like, how am I supposed to take a decent selfie?”, “And you don’t even match my furniture.”, “When we used to play dress-up, I just felt like your heart wasn’t in it. I could never get the clothes on you.”, “You were always staring at me. Even when I was eating.”, and “We would be out together and you would be off making new friends with literally anyone”.

The spot, featuring eventually the man saying he wishes he had thought about it a bit more before he got the dog,
ends with the message “A dog is for life, Not just for Christmas”.