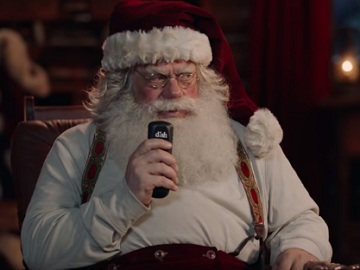 The spot, created by Publicis Mid America, features Santa in front of the TV, clicking up and down on the remote control to find his favorite Christmas movie. Luckily, the Spokeslistener (played by British-American actor Harry Van Gorkum) steps in and helps him find what he’s looking for. “DISH has something for this. Stop scrolling and just tell the remote.” – the Spokeslistener tells Santa, who’s initially raising his eyebrows but then gives it a try naming the film he wants to watch, Die Hard. Seeing the movie popping up on the screen, via DISH On Demand, he starts laughing, delighted that his wish has finally come true. However, when he hears the Spokeslistener uttering the same “Ho Ho Ho” laughter, Santa asks him to get his own laugh.

“DISH Voice Remote. Stop scrolling. Just say what you want. And it’s on.” – the voiceover says at the end of the spot.