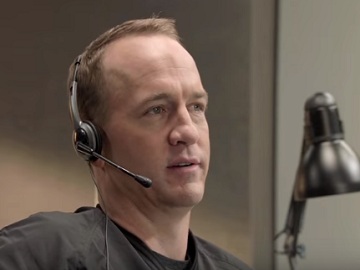 Peyton Manning stars in a new ad for DIRECTV NFL Sunday Ticket’s new ad campaign as the commissioner of his
fantasy football league.

The spot, created by agency Grey Global Group Inc. and titled “The Commish”, features the retired Broncos quarterback running a league by mapping out stats and charts on the walls of his office, which seems a football war room, and having confrontational phone calls even with kids, apparently, as the last person he’s talking to reveals to be a young boy named Dennis. “I don’t have time for this. I’m trying to run a classy operation here.”, “You can’t call your team Dogs and Kisses.”, “How do I choose what games to watch? I don’t. You want my advice? Get DIRECTV’s NFL Sunday Ticket.”, “If you auto-draft your team, you’re banished from the league.”, “I am not taking this too seriously, this is just a hobby.”, “I’m just like a pair of sweatpants, I’m super casual. We’re having fun.” – these are just some of the lines Manning tells over phone.

The commercial ends with the voiceover saying “Fantasy Football – Serious business. Seriously great coverage only with DIRECTV’s NFL Sunday Ticket.” and with the Dallas Cowboys’ quarterback Dak Prescott suggesting Maning to get a job.

Manning has starred in other DIRECTV commercials in the past, in some of them alongside Lionel Ritchie.