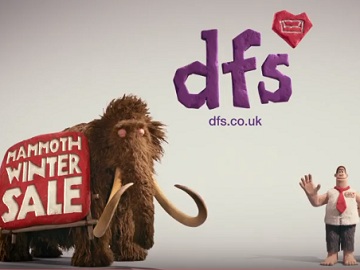 The movie is set at the dawn of time, when the earth was populated by prehistoric creatures and woolly mammoths, and follows Dug as he, helped by sidekick Hognob and love interest Goona, unites his tribe against Lord Nooth and his Bronze Age City to save their home.

The 30-second spot, created by agency krow and titled “Search for Comfort”, shows Dug’s tribe, who are staying in chairs made of stone, in carnivorous plants, and on cactuses, visiting a DFS store during its Mammoth Winter Sale (event promoted by a mammoth standing in front of the store) and fighting over sofas. Luckily, at DFS, where “everything is hand-made to order”, there is a sofa for everyone.

Throughout the ad, which is set to debut on December 22 and run on TV and in cinemas, it is highlighted that customers have the possibility to get a 4 years interest free credit with nothing to pay for a year.

Early Man, directed by Academy Award winning director Nick Park, will be released in the UK theaters on January 26.