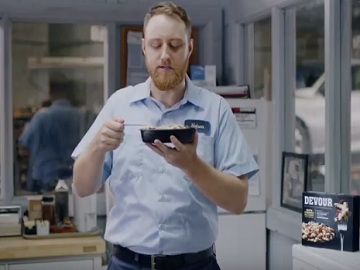 Devour has released a new ad to promote its frozen meals, described as “the first to put mouthwatering meals and
convenience in the same box”.

The 15-second spot, titled “Devour Food You Want to Fork”, features Nelson, an office employee in a garage who talks to his Devour White Cheddar Mac & Cheese with Bacon. “Oh, Devour, so creamy, the little sounds your crispy bacon makes drive me crazy. You naughty little…” – the guy says, spanking then the meal with his fork. At this point, a coworker shows up, asking him if he just spanked his lunch. Nelson is not afraid to admit, though, that he did, and continues to eat.

The commercial ends with the voiceover saying the brand’s tagline, “Food You Want to Fork”.