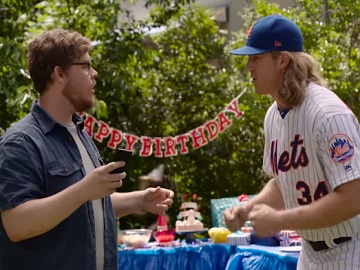 Delta Air Lines has released a new commercial, urging viewers to enter Delta Dugout for a chance to win a trip for two to a New York Mets road game in 2018.

The 30-second spot, titled “All Star”, which is a new installment in the Travel Victories series, features a dad at an outdoor birthday party for a kid, holding a glass of cold water in his hand and looking at his phone. When he reads out loud the notification he received, informing him he just reached Gold Medallion status, Noah Syndergaard shows up and slaps him on the back, making him drop the glass. “Yeah, man. All-Star move!” – says the New York Mets pitcher. The two soon begin to say “All-Star” louder and louder, until the children playing around stop and look at them.

The spot ends with the tagline “Travelling with Delta is always a win”.

The Delta Dugout Sweepstakes is open only to legal residents of the fifty United States and D.C. who are 18 years of age or older. Delta will fly one one fan and a guest to a select away game of the New York Mets during the 2018 regular season. Trip will include airfare, hotel accommodations, game tickets, and more.