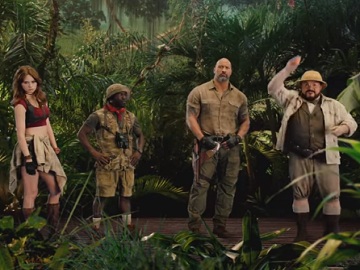 Dave & Buster’s shows us, in its latest ad, how the cast of Jumanji got in shape for the movie at Dave & Buster’s and promotes its limited-time offer that enables you to play four games free with same day $10 game card purchase or reload.

The 30-second spot features Karen Gillan (who plays Ruby Roundhouse), Kevin Hart (who plays Moose Finbar), Dwayne
Johnson (who plays Dr. Smolder Bravestone), and Jack Black (who plays Professor Shelly Oberon) revealing how they
got in shape for Jake Kasdan’s “Jumanji: Welcome to the Jungle”. Hart is the first one to share the secret: four hours of Lane Master five days a week. Karen’s secret is Super Shot, Johnson’s secret is Dance Dance Revolution and Black’s secret is Let’s Bounce.

Lane Master, Super Shot, Dance Dance Revolution and Let’s Bounce are all games that you can play for free only at Dave & Buster’s. The offer, valid through December 24th at participating stores only, has a limit: one offer per person, per Power Card, per day.

Jumanji: Welcome to the Jungle, a standalone sequel to the 1995 film Jumanji, about four teenagers who find a video game and get dragged into a jungle setting, where they become their avatars and are forced to play along and finish the game in order to get out of the game, is set to hit theaters December 20.