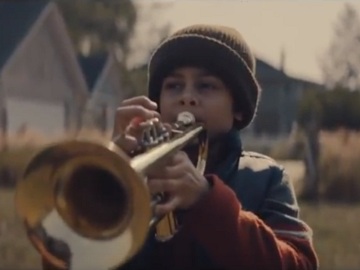 The chain of specialty/import retail stores Cost Plus World Market has released a short holiday film, titled “The
Performance”, telling the story of a kid who finds the inspiration he needs for a Christmas music performance
by gathering the support of some unlikely friends.

The film, set before the Christmas holiday, stars a little boy who picks his instrument case and leaves the house, while his mom is cooking and his dad and older brother are untangling Christmas lights. He stops on the field, not far from his house, which is situated in a seemingly remote area, and removes the instrument from the case, which is a trumpet, and begins to play. Hearing the music, a white, brown, and black llama are seen raising their heads and swiveling their ears. Next, a herd of llamas is seen crossing the road in front of a Jeep, heading to the boy.

A white llama makes eye contact with him and this proves to be an inspiration for the kid, who is seen, later on, running into the backyard again, holding his trumpet case, while his family bustles aorund the living room, carrying presents and hanging decorations.

This time, he pulls out also a piece of sheet music and begins to play in front of an audience of llamas. As the ad continues, it is revealed that his “concert” in front of llamas was actually a rehearsal for his performance at a Christmas concert, that he eventually holds with a small stuffed white llama dangling from the end of his trumpet.
The commercial, which also showcases a Christmas table, set with dinnerware from Cost Plus World Market, Christmas ornaments and various decorations, tree skirts, wreaths, and more, ends with the onscreen line “Imagine the joy you’ll bring”.