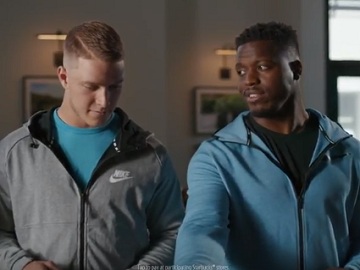 Visa highlights that, now, you can tap to pay quickly and easily with your contactless Visa card or contactless-enabled device at participating Starbucks – and everywhere you see the Contactless Symbol – in a new commercial, starring Carolina Panthers running backs Christian McCaffrey and Jonathan Stewart.

The 30-second spot features the two football players in a Starbucks with Stewart paying fast with his contactless Visa card while his teammate is taking his wallet out of his pocket and telling him he’s “too slow”. Other several persons, including two male friends, a mother and daughter, a young couple on a date, are also shown using the same payment method or their smartwatches to pay for orders before their companion has the time to react.

“You want to spread a little joy? We’ve got an easy way to do it. Now, you can tap to pay with the Visa at Starbucks this holiday season.” – the voiceover says at the end of the spot.

McCaffrey also appeared, together with his teammate Luke Kuechly, in a new commercial for CPI Security, released earlier this year, in which the latter bakes gnome cookies as a welcoming gift for him, McCaffrey being a rookie in Panthers’team. Back in 2015, Stewart appeared in a commercial for SCSM Sports, that journeys through the obstacles we often face in life and highlights that, with faith, we can overcome them.