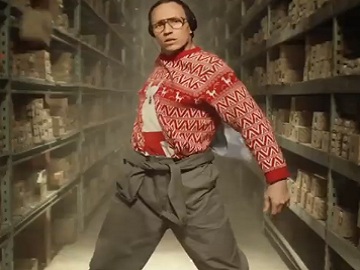 Colorado Lottery promotes its Holiday Scratch tickets in a new commercial, inviting you to have fun and give fun this holiday season.

The 30-second spot features a janitor (played by Chase Evered, who runs the Colorado school of break dance, School of Breakings) remaining the last one in the building he works in, after all his coworkers leave. He then puts his headphones on, strips off his uniform, and starts dancing, showing off some quite difficult moves.

Chase Evered (33), known in the dance world as “Chase ‘Em Down”, is well-versed in all dance forms within the Hip
Hop Culture and has appeared in commercials for Starz Cinema and the documentary movie “Rip Sin City”, highlighting Hip Hop Culture in Las Vegas, Nevada.