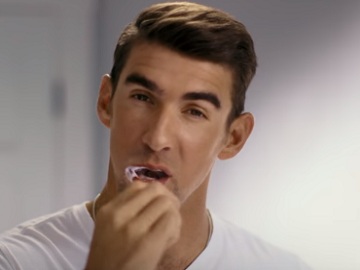 World champion swimmer Michael Phelps teamed up with Colgate-Palmolive to drive awareness of water conservation and educate people about the importance of water in a campaign called “Every Drop Counts”.

He stars in a 30-second spot washing his teeth and telling viewers to turn off the faucet while brushing, just like he does.

“You know we waste up to four gallons every time we brush while the water’s running? Four gallons. Clean, drinkable water. Down the drain! That’s why I’m partnering with Colgate.” – says Phelps, mentioning that together they’re creating a new brushing habit and inviting viewers to join them. “So please remember, turn off the faucet when you brush! Today and every day!” – concludes the swimmer.

The Olympic Swimming champion, the most decorated Olympian of all time, with a total of 28 medals, signed on as global ambassador for Colgate and The Nature Conservancy’s Save Water: Every Drop Counts campaign, earlier this year, aiming to educate 10 million children about the importance of turning off the tap while brushing their teeth.