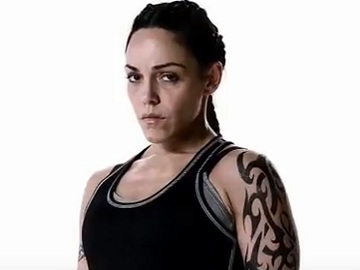 “Occasional constipation can be a pretty though customer. But Colace is the #1 doctor recommended stool softener brand.” – the voiceover says in the 30-second spot, while on screen a small white bunny wearing the Colace name brand at his neck appears next to a tattooed tough young woman (Phoenix Carnevale) and makes her smile. “It’s been gently softening up hard cases for over 60 years. So next time you’re up against occasional constipation, remember Colace and feel the difference a little softness can make.” – the voiceover adds, while Phoenix is seen cuddling her new furry friend.

The ad also informs that this stool softener, available at CVS pharmacy, Rite Air pharmacy, Walgreens and other fine stores, should be used only as directed, for occasional constipation, and mentions that it is not for use in animals.

Phoenix Carnevale is a dedicated Martial Artist, she has experience in Karate, Western Boxing, Muay Thai and
most recently Brazilian Jiu-Jitsu. She is also a NASM weight loss specialist, certified in Kettlebells, TRX, post rehabilitation and several other fitness modalities.