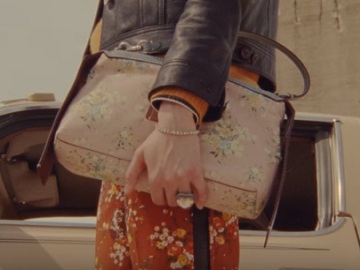 Coach showcases, in a new commercial, its Bandit bag, which features a detachable interior compartment that can be used on its own.

The 60-second spot, set against the Manhattan’s skyline, features two women meeting up and taking out of their vintage cars the Couch bags. Presented as the first chapter, titled “Dynamic Duo – “Two Bags in One”, the spot introduces the HOBO as “Big Momma”, and the WRISTLET as “Half Pint”. The two women are shown looking straight into each other’s eyes, from the distance, for a while, and then the one owning the WRISTLET is shown getting in her car also with the HOBO, which she most probably stole from the other (if they didn’t hold a staring contest, which is less likely). One thing is sure, there will be more chapters as the “Bandit” story will be continued (and maybe viewers will be shown what happened between the two ladies that day).