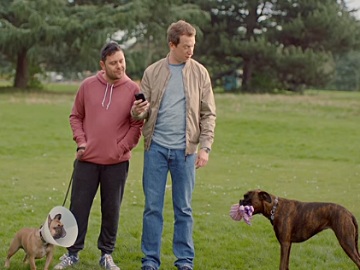 ClearScore continues its ad campaign starring Charlie and the boxer Moose with a new TV advert, featuring the two in the park.

The 30-second spot shows Charlie checking his credit report on ClearScore, when a friend, Kevi with his dog, Beam, who salutes in both German and French, show up. Charlie tells them he’s checking his free credit score report on ClearScore.com, mentioning that you get credit card and loan recommendations, all based on your credit score. At this point, Moose comes by with a squeaky octopus in his mouth, asking Charlie “Wat Doing?”. The latter answers, but Moose doesn’t seem too interested in that. He just wants his “bro” to take the squeaky and throw it. Kev’s dog asks him to get going because he looks like a “limp”.

The spot ends with the voiceover urging you to “take control of your credit score and report for free”.