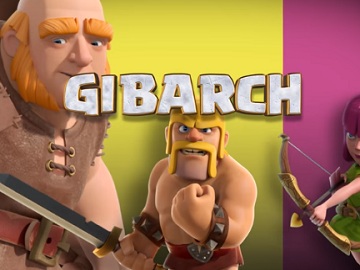 Clash of Clans presents the GIBARCH battle strategy in a new commercial/trailer, urging users to clean out their enemies (in the game, obviously) using this strategy.

Players can raise their own army with all kind of fighters, from rage-filled Barbarians to pyromaniac wizards, and lead their clan to victory, build their village to fend off raiders, battle against millions of players worldwide, and forge a powerful clan with others to destroy enemy clans.

This strategy is named GIBARCH based on the fighters used, Giant, Barbarian and Archer.

“Here’s a battle strategy to rob your enemies’ blind. GIBARCH is the plan we’re talkin’ about. GIBARCH is the way to clean your enemies out. Get down to the barracks and call in the big guns. Giant may be slow, but he takes the hits and gets the job done. Now bring in the bruisers since their defenses are down. With their swords and mustaches, they smack the enemy around. Then take ’em out with the Markswoman, who’s got the long game. She’s got an eye for targets and The Archer is her name.” – sings the voiceover, presenting thus the GIBARCH battle plan.

Clash of Clans is free to download and play, but some game items can also be purchased for real money.