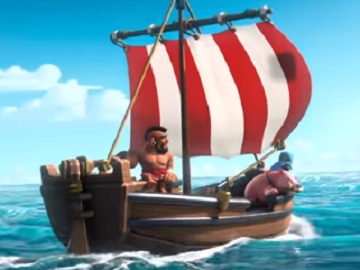 After the “How Do We Get Over There” Update teaser released a few days ago by The Clash of Clans, urging you to “discover what lies beyond your shores”, today, a new teaser was dropped, revealing how the adventure of Hog, Piggy and Wizard continues.

The clip, carrying the message “A new Land means new Possibilities”, features the boat shown in the previous teaser
floating in the sea, with Hot, Piggy and Wizard on board. Titled “Captain’s Log: Day 1 – A New Me”, the trailer hears Hog writing down in his log his goals. “Discovering new land means new possibilities. I could totally reinvent myself. Back home, I’m Hog Rider – the epic warrior with a great voice who demolishes castles with his hammer. But in the new land, I could be a new man. I’d call myself Chas. My neighbor would say “Hey, Chas!” and I’d say nothing, cause I forgot that’s my new name. But when I’ve got my new job, as a gardener, I’d smile ’cause he called me Chas.” – are Hog’s notes on his first day on sea.

The teaser urges you to stay tuned to see what lies beyond your shores.

In Clash of Clans players must raise their own army and lead their clan to victory. In order to achieve their goals, they can build their village into an unbeatable fortress to fend off raiders and defend it with a variety of tools, from cannons and towers to bombs, mortars, walls and traps. They can join together with other players to form the ultimate Clan and fight against rival Clans in epic Clan Wars, and battle with the Goblin King in a campaign through the realm.